by Rebecca Steinberg 5 years ago5 years ago
48views
0

Warner Brothers has been delighting audiences with their Lego movie franchise since 2014, unfortunately, while this installment is just as beautifully rendered and fun, it does not have the same heart. I am the first to admit that I am not the target audience for this movie, which is set as a story being told to an 8 year old boy. My sons, ES, age 9, and MS, age 6, however are absolutely in the correct demographic- kids, 10 and under, who love LEGO, and are already familiar with the world of Ninjago. So I decided to ask them their opinions on the film – you’ll find mine below as well.

RS- Alright boys, mama has some questions for you about the movie. What did you think of it?

ES- It was really funny.

MS- I liked it. It was nice that all the characters from the show were in the movie.

I thought it was bright and flashy for the most part, some great one liners here and there, but not enough to keep me interested through a second viewing. (note – this was my second viewing as I had already seen it once at a late night screening earlier in the week) 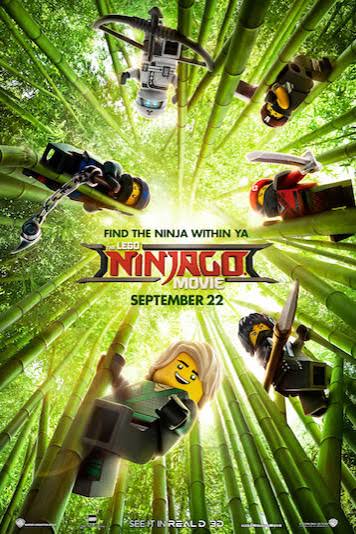 RS- Well, I’m glad that you enjoyed it. Who was your favorite character?

MS- Jay! He has the most energy (this is a joke as told by a 6 year old as Jay is the Ninja of Lightning) and he’s afraid of everything which is funny.

ES- Kai (the Ninja of Fire) because he’s really confident and his mech (the robot he fights in) is the coolest.

The coolest character is undoubtedly the Fuchsia Ninja- this is a throw away one liner joke that i will not ruin for you. Runner up is Lady Iron Dragon, because everyone likes a strong woman.

RS- What was your favorite part of the Movie?

ES- When the Green Ninja (Lloyd) fires all of his missiles at Garmadon from his dragon mech.

MS- Garmadon “firing” people out of his volcano.

I have to admit the volcano thing is pretty funny. My favorite part is an escape scene when Garmadon tries to teach his estranged son Lloyd to throw. It is one of the few moments of the film that has a message other than 10 year old humor and cat memes. RS- Okay, how about your least favorite part?

ES- *redacted for spoilers* part near the end – that was gross.

MS- Everyone at Lloyd’s school is mean. It isn’t nice to be mean to someone because of who their dad is.

RS hugs MS until he complains again being “squozen” too hard

My least favorite part is everything to do with the monster and destroyer of Ninjago City, Meowthra. Yes. It IS a cat. And the opening and closing live action sequences- which feel forced, rushed, nonsensical, and uncomfortable at times.

RS- Would you rather watch the new movie or the TV show?

ES and MS enthusiastically- THE MOVIE!

Again the movie proves that it was not meant for me. I would pick the TV show every time. The stories are more fleshed out, the characters funnier, the voice acting far more compelling, despite how famous the movie voices are. The best part of the movie is Jackie Chan’s infamous end of film blooper reel and the IMDB page. RS- How do you feel about the voice actors from the show not being in the movie?

MS- I like that they changed it up. The new Garmadon is funnier.

ES- Super-duper-ooper-schmooper bad. They worked so hard on the show; they should have been in the movie.

RS- Which is your favorite of the LEGO movies?

MS- Ninjago! Everything is funnier!

ES after many minutes of thought- I CAN’T DECIDE! Can’t I say I like them all equally?

RS- What LEGO franchise do you think they should do next?

ES- I like it when they mash-up so either LEGO Movie 2.0 (which is officially being called The LEGO Movie Sequel) or a LEGO Dimensions movie.

MS- CHIMA!!! *he screamed while jumping up and down*

Whichever franchise they decide to tackle next, I hope they really take their time to flesh out the story. The LEGO Ninjago Movie has no heart, no moral lesson to be learned. Which is really saying something because the movie tells us that we should “learn to see things from someone else’s perspective” around a dozen times, but there is no payoff to that set up. It is slightly stupid, extra shiny fun. Like the “popcorn flick” of animated movies.

The Boys give it 5 out of 5 Nerdskulls

Mama gives it a 3 out of 5 Nerdskulls