Jason’s Vault is a place where I hope to show you something you have either forgotten about or would have never known exhisted.  This week I picked two films.  One from 1958 and the other from 2007.

Queen of Outer Space was parodied in an episode of Futurama when the crew lands on a planet inhabited by giant women.  The original film on which this episode was based is both a sexy, vintage sci-fi and a campy unintentional comedy in its outdated effects and cheesy dialogue. If you’re a fan of 1950s sci-fi (and if you’re not then you’re either a communist or twelve), this is a must-see. The giant rubber spider is almost as hilarious as the obvious character types, especially the “miniskirted, raygun-packing glamazons” (Tom Weaver). But amazingly it offers an intriguing commentary on gender issues. The film has a few brilliant moments in which it challenges stereotypes and sexism but really ends up simply reinforcing them. The underlying message is that women “need man’s love” or they become cold, vindictive, and irrational. The villainous queen is a man-hating feminist who has been scarred both physically and emotionally by a man and thus has an irrational hatred for men.  But how could she be good?  In a planet of beautiful vixens, she’s a monster.  Apparently in Venus women are only valued for their physical beauty just like on Earth.  The stereotypical portrayal of men is also both amusing and disturbing, especially the lover-boy navigator’s terrible pick-up lines and misogynistic insults.

I’d say that this would make an excellent candidate for a modern adaptation in the shape of a satirical comedy.  Someone pitch this to Simon Pegg! 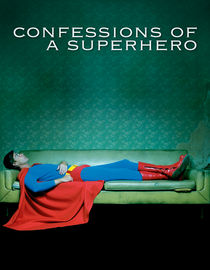 Confessions of a Superhero is a documentary follows four hopeful actors who crusade the streets of Hollywood dressed as superheroes in order to make a buck before their big break. The directors of this documentary brilliantly capture the deluded hopefulness of four downtrodden people who genuinely believe in an American dream found in the vibrant colors of comic books and entertainment magazines alike. You can’t help but sympathize with these genuine people who, strangely enough, have quite a lot in common with the characters they portray. The Hulk has had a hard life, Batman has a “dark past” and a penchant for violence, and Wonder Woman will lasso you with starlit eyes and a stunning smile. Superman, easily the most lovably tragic of the three, is the boyscout we all know from the comic books. He gives Ghost Rider a lecture about not smoking while in costume.  You get the sense he really believes to be the Man of Steel more than he believes he’ll be rich and famous.

Both of these can be found on Netflix (of course).  Confessions is an instant play. Queen was at one time, but now it’s DVD only.